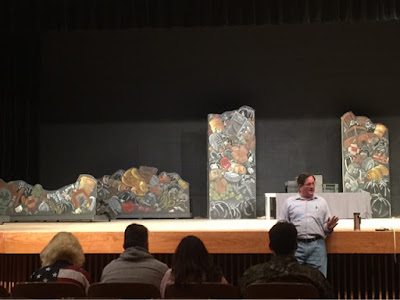 My Husband giving notes to his cast after rehearsal

Each fall my world is totally consumed with our high school one-act play competition.  I am married to the drama coach so I am his set designer, make-up and hair designer and anything else he asks me to do.  We typically start casting and rehearsing in August and finally close the show the first of November.
One-act play competition for high schools involves creating a production that can be performed in in 45 minutes - which includes setting and unsetting the stage as well as performing the show.  We live in a very remote area of Oklahoma so we have to travel our show to regional and hopefully, state competitions.  So the big challenge is creating an interesting set that can be loaded in a trailer, hauled across the state and set up and taken down in just a few minutes.

"Middle Ages White Guys"
My husband chooses his shows based on the talent he has from year to year.  This year he decided to direct a little known show called "Middle Aged White Guys."  It is a parody about conservative brothers who meet yearly to remember their dead girlfriend at the city dump.  So my job was to create a giant junk yard.  Since the show is pretty goofy, I decided to paint the scenery in a cartoon style.

By the time I was finished, I had painted over 400 square feet of scenery. 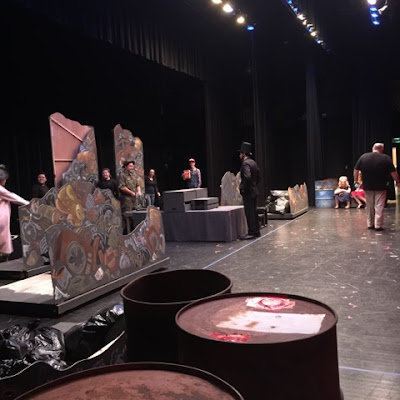 Backstage ready to begin our production at state

Our production won second at our regional competition and then took fifth at state.  Our last performance was back at home for families and friends.  After all this work, the scenery is now torn down, partially stored or discarded.

As a teacher, the biggest reward of doing this crazy, draining, ridiculously challenging activity is working with some terrific people.  I loved this group of kids. 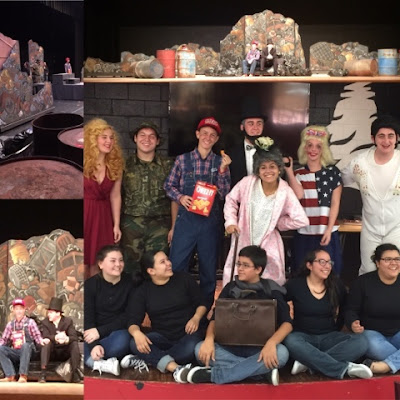