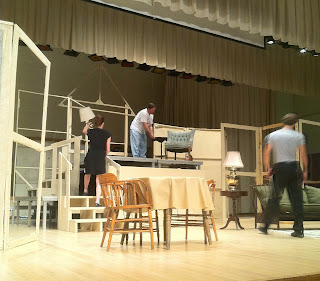 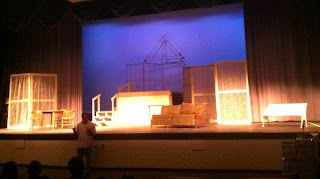 It's been quite awhile since I've found time to blog and the reason is my husband and I have been busy building and preparing a one-act play for competition.  Each fall my husband (who is our high school speech and debate coach) directs a one-act play for his students.  I am usually drafted to help in some way - typically with scenery painting, costumes and make-up.

This year he decided to finally attempt the play "August: Osage County."  It is a monster production involving a two story set and lots of hair and make-up to age teenagers in older adults.  Not only do we create the show, we create it to travel for competition around the state.  One-act competition requires the performers to build the set, do the show and remove the set all within 45 minutes.  That means our enormous farm house has to be tucked into the wings of a strange theater then dragged onto the stage and organized into a working set in about a minute and a half.

This production has consumed our lives for the month of October.  We traveled five hours last week to present it at the regional competition and happily won first place.  Next week we travel another five hours to compete for a state title.  No easy feat but also a lot of fun and a personal challenge.  I don't know many award winning play productions who travel their sets in a horse trailer.

Now that the set is finished I have enjoyed some time back in my studio preparing for my Thanksgiving art show in New Mexico.
Email Post

Paxton Maddox said…
When and where is your show in New Mexico? We will be traveling back through Santa Fe around Thanksgiving.
6:01 PM