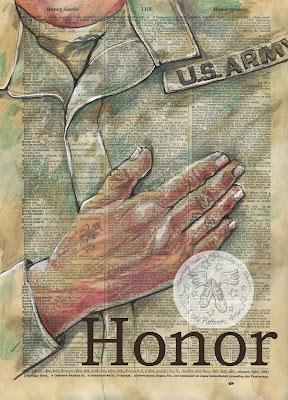 I first drew an honor page three years ago.  I asked my father-in-law who had served in the army to let me take a photo of his hand over his heart.  I then asked him to send me pictures of any medals he might have been awarded during his service to have on his shirt.  After I finished the drawing, I never made a scan. I never made any prints.  I gave it as a one-of-a-kind gift to him.  The drawing hangs on the walls of his home.

I've done quite a few pages about the arm forces and the military and I wanted to include something new in next weekend's art show over Memorial Day.  I had to do quite a bit of searching for old photos on my computer and I finally found the photograph of my father-in-law's hand.  I decided I wanted to make this more of a universal piece so I suggested some camo and added the army tag.

I am very proud of my family for their military service in a variety of branches if the armed services.  I'm very grateful to my friends and students who have served.
Email Post
Labels: army army drawing Dictionary Art Dictionary Drawing flying shoes honor

Linda B. said…
This is lovely - your use of the page coloring as part of the camo is brilliant. Always love your work on text paper!
8:32 AM