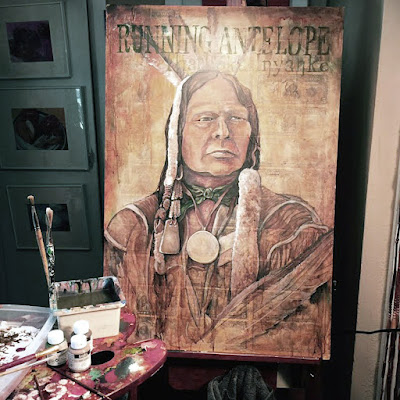 I am calling "Running Antelope" finished.  This is actually my second painting of this amazing, Sioux Chief and I think he is much better than his predecessor.  Like so much of my work, he began as a demonstration piece in my classroom.  Many such pieces never get finished but are stored away until I teach that unit again.  But in this case, I knew I wanted to finish and frame this guy.

I love the story of this Native American.  He was the first to be honored with his image on U.S. currency. The story behind this painting is a tragic mix of cultural misunderstanding.  Running Antelope was said to be a great speaker and close advisor of Sitting Bull.  He is considered one of the eight great chiefs.  Unlike many such powerful chiefs of his time, he advocated for peace with the white man.

To honor Running Antelope, the government placed his image on a five dollar bill.  Running Antelope posed for the engraving in his full regalia.  Somewhere along the line, either the photographer or the engraver - who knows - someone decided to change his traditional Sioux headdress for the traditional headdress of a Pawnee tribe.  The Pawnee and the Sioux were not friends and to change such a culturally important part of his attire for a warring tribe was beyond a simple insult. 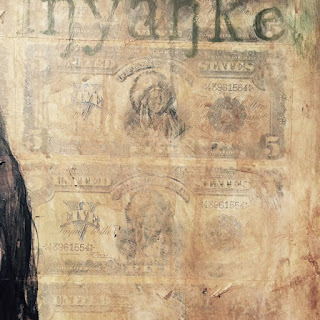 I found online images of Running Antelope's $5 bill and reproduced them.  I then collaged them to a gesso primed 24" x 36" sheet of masonite.  I demonstrated all this process with my students while they were assigned a layered, collage painting.  I washed out some of the money with gesso washes and then applied layers of thin acrylic.  I deliberately limited my palette to neutral earth tones.

I created some of the painting at school so my students could observe how to apply some opaque and some transparent images over their backgrounds.  It's always a challenge for painters to decide where to have the overlayed image solid and where to let glimpses of the background show through.

Then this summer I brought Running Antelope home to finish.  The first painting like this was created years ago and my son-in-law was really upset when I sold it.  He has reminded me how much he loved the story and painting and wished he had it.  Now he does.  This version of the painting is not for sale but intended for my family. 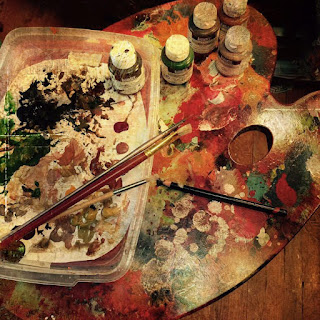 I have another acrylic painting waiting in my studio.  I have lots of inspiration for more dictionary art but for now, it's fun to do something different.  Every new piece brings new discoveries and growth.  School starts in two weeks and I have more summer projects than time.

Laure Ferlita said…
Stunning piece of work! I'm sure your students were thrilled...well, I would be anyway.
5:32 PM