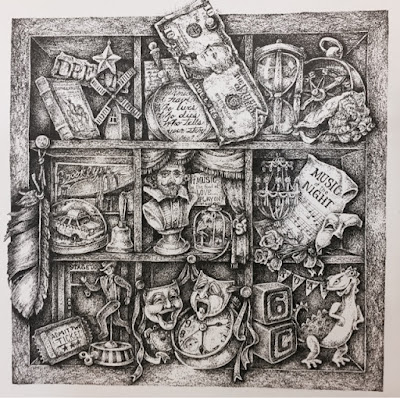 For the last 12 years I have created an intricate ink drawing while teaching my students an ink unit.  I have usually used stippled ink which means the entire image is created with zillions of tiny dots.  This is my latest ink drawing which I will now reproduce on adhesive labels and personalize as bookplates for my family, friends and coworkers.

Bookplates are personalized labels used to identify book ownership are glued into the first page of a treasured book.  As a teacher I love creating something personal for fellow book lovers. 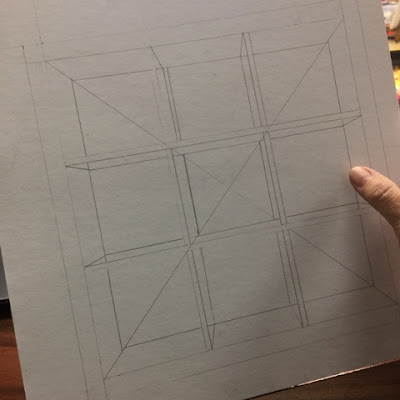 Each year I try to create a drawing that somehow commemorates the past year.  For my 2016 drawing  I wanted to celebrate an amazing year of theater.  My husband and I love theater and during the summer we got to travel and see nine Broadway shows and attend the amazing Oregon Shakespeare Festival. I also got back in the director's chair and directed a huge production of "Man of La Mancha."  We were thrilled to watch our oldest grandson discover theater and perform a lead in a local production, my husband directed a winning high school one-act play and perhaps the best (tho admittedly not theatrical) production of the year was our newest grandson.

With so much to capture I decided to build my drawing as a nine sectioned memory box and to draw little mementos of each of the productions from the year.  Each little section features images that represent one or more production. 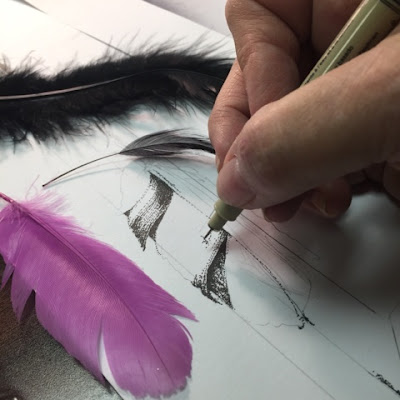 After drawing out the shape of the memory box I started collected items to draw that represented each of the productions.  Some of the shows were easy to depict while others took some thinking.  I wanted the overall look of the finished drawing to be like a keepsake collection with some items pinned to the frame and others piled up in the individual boxes. 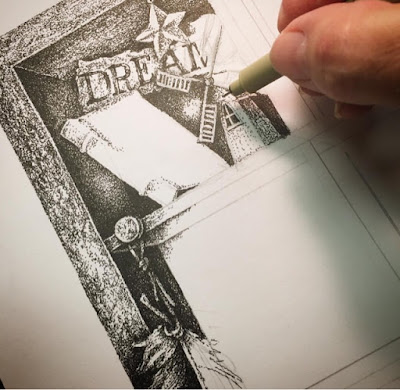 The first section of the memory box represents "Man of La Mancha" which proved to be an enormous undertaking.  I soon discovered that I needed to build up very dark values to create the illusion of the different sections of the box.  Creating such dark values required far more individual dots piled on top of each than I had previously used.  So this piece is by far the most time consuming stipple piece I've ever created. 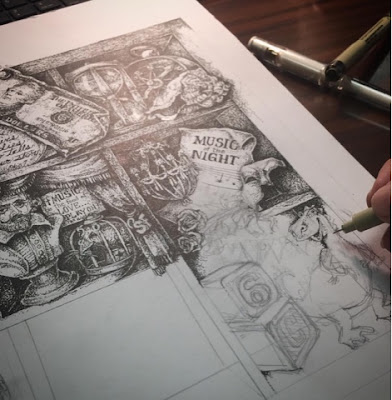 One of favorite sections of the drawing in the little dinosaur and wooden blocks in the final section of the box.  My newest grandson's nursery is filled with dinosaurs so this symbolizes him.  I included a number 6 since his is our 6th grandchild and the C is the first initial of his first name, Calvin. 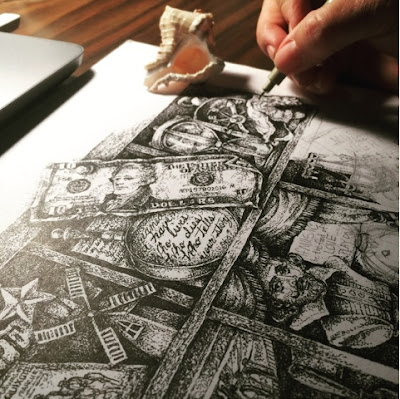 I always try to challenge myself each year when I create this annual, ink piece.  It seemed I outdid my challenges this year with so many different objects.  I was concerned about the 10 dollar bill with Alexander Hamilton's picture on top but it was really fun to do.

One of the fun things about creating these personal drawings is I can hide all sorts of little things around the work.  For instance, the serial numbers on the money are special dates, the clock face has a family birthday, etc.

I titled the piece "Theatrical Flots and Jets."  While I was working on the drawing I came across the term Flotsam and Jetsam which are nautical terms for trash and odds and ends that are thrown overboard or jettisoned out of ships.  The term has been picked up by collectors and photographers around the country to describe insignificant keepsakes and collected treasures.  In fact, there is a hashtag called #fjnine which is used all over the internet to tag photos comprised of nine photos of these kind of odd collections.

Here is a description of what I have drawn and why.  It's lengthy but if you are interested, please read on -

Section 1
"Man of La Mancha" includes a book, a windmill, a torn paper reading "Dream" and that unreachable star

Section 2
"Hamilton (wow, what a thrill to actually see this musical on Broadway with the original cast)  I included a letter with a magnifying glass highlighting the lyrics I love most - "Who lives, who dies, who tells your story and a $10 bill which has Hamilton's likeness

Section 3
"Long Day's Journey Into Night" was a four hour long show staring Jessica Lange.  For this play I used an hourglass, a compass and a seashell to represent the home by the sea.

Feather
I drew a single feather hanging on the frame to represent the amazing play "Blackbird"  This production was fantastic but very dark and disturbing.

Section 4
"Streetcar Named Desire" and "Crucible" which we saw on the same day rushing from Brooklyn to New York in one of the wildest Uber rides I've ever had. (I drew a taxi in a snowglobe)  I didn't want to use a typical streetcar and  the Crucible is also dark I decided to use a school bell since this flawless production was set in a modern day schoolhouse.

Section 5
This section is all about Shakespeare and we saw plenty of Shakespeare last summer.  In NYC we saw an all female version of "Taming of the Shrew" (my shrew is inside a cage) and then the hilarious "Something Rotten" musical.  Later in the summer we were fortunate to attend the Oregon Shakespeare Festival (OSF) and saw "12th Night" so I included my favorite line from that play.

Section 6
This section is pretty easy to recognize.  I finally got to see "Phantom of the Opera" on Broadway.  All I wanted to see was that giant, chandelier drop.

Section 7
One of the highlights of our NYC theater experiences was actually being invited backstage to meet the cast after "Shuffle Along."  A friend of a friend was in the production and admitted us through the stage door where we met Tommy Tune, Brian Stokes Mitchel, Billy Porter and Audra McDonald.  I drew a little stage door, a ticket of admission and a little music box dancer which looks like the precious young man who hosted us that magical night.

Section 8
For this section I drew the traditional comedy tragedy masks but also placed a little clock with our oldest grandson's birthday, 2:25 as the time.  It was so exciting to see his love for theater pay off when he played the lead in a local production.  It was like passing the torch.  I also have a weird little cracker behind the clock which is actually a Cheese It.  Cheese It's were a primary prop in my husband's annual one-act play he directs each fall.

Section 9
Not all wonderful productions from 2016 were plays so the final section of my memory box is to celebrate the birth of our newest grandchild.  His nursery is filled with dinosaurs and his our 6th grandchild.  The C is for his name, Calvin.