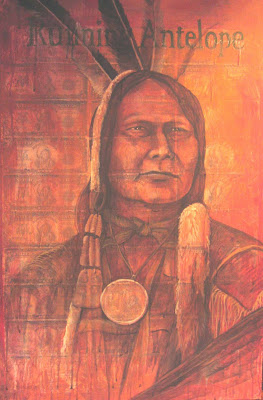 Tempertatures were well over a 100 and the wind gusts were so bad that booth tents were more like parachutes but the Sunflower Art, Food and Wine Festival was a tremendous success for me. I hadn't shown my work like this for nearly 25 years and my "comeback" now gives me encouragement to push myself even more.

The last piece I painted, Sunflowers on Red, was the first piece to sell before I even had it hung. Friday night, a friend dealt with me to sell it to a contact outside Topeka, Kansas who saw it on my facebook posting online. Saturday morning, the sunflowers on violet sold to a local Bed and Breakfast. It didn't even have a frame and it almost didn't make the booth! So it was a good event for it's namesake.

Before the day was really underway, the event coordinator who also directs the little gallery which sponsors the event pulled me aside to tell me that "Running Antelope" had sold Friday night as well. "Running Antelope" and "Land They Belong To" were both entered in the People's Choice Competition with festival attendees voting throughout the day. "Running Antelope" has been at home at my daughter's home for over a year and was born as a demonstration piece in my classroom. I was thrilled and shocked to learn it had sold at a very good price. Just that sale alone had more than covered my expenses for the festival.

The rest of the day actually saw small crowds and few serious buyers with the heat and wind wearing everyone down. My banner was one of only three selected for a live auction which was fun to witness even though the proceeds went to the festival. But the one of the final highlights of the day was when "Running Antelope" was announced as winner of the People's Choice award with $500 prize money. I later learned that "Land They Belong To" was a very close second which really was a great surprise since I'd asked family and friends to all vote for "Running Antelope" and had abandoned promoting "Land." To have my two pieces top the competition of many very nice pieces was awesome!

So "Running Antelope" has a new home with an executive of Seaboard originally from North Carolina, the banner now lives with our hospital administrator and I came home with some pride and affirmation that other people appreciate what I love most.

Thank you, everyone, who helped me and made this possible!
Email Post