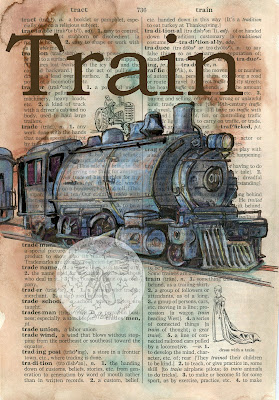 This is another commissioned piece I created especially for a friend.  My customer wanted a vintage looking train drawing to give to his father.  It was an interesting piece to work on this week since our tiny community made international news after a head on collision between two trains happened just outside of town.

The NTSB is still not announcing a definitive cause of the train wreck but early reports seem to indicate some kind of human error lead to two freight trains colliding and killing three of the four personnel on board.  The loan survivor did so by jumping off one of the trains before impact.  The resulting fire took a couple of days to put out and involved fire fighters from three states.  It was quite the event and brought a lot of national attention and interesting professionals into our little town for the week.  After seeing the wreckage first hand it is hard to believe how quickly the tracks were cleared and restored so trains could be up and running once again.

Trains are a vital part of our rural area.  The construction of the railroad determined the layout of the towns across the panhandle.  Towns sprung up every ten miles along the tracks so steam engines could refuel at ten mile intervals.  Grain elevators were also established next to these established stops. 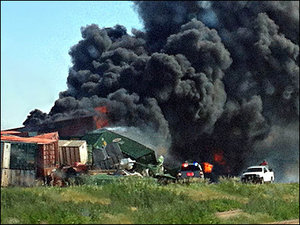 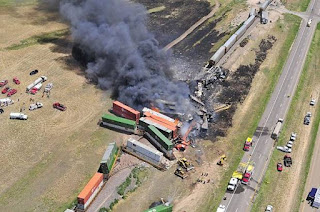